Painting by Gérard Calvet, click image to see more of the artist’s work at: www.GerardCalvet.fr

Provence glimpsed from the autoroute that day was the dream one had dreamed long ago on seeing the first Van Gogh – burnt Sienna brick in the shuttered houses, little cypresses, young poplars on the skyline, snow on the faraway Savoy Alps, blinding amber sunlight, terraced fields. The river at Lyon was broad and beautiful.

We were to stay in the lovely Montpellier house of  Gérard and Yvonne Calvet, which had Gerard’s paintings covering every wall and a beautiful garden where I would write in the mornings during our stay. After a trés simple lunch on our arrival – which was in fact elaborate and delicious – there was coffee and fine champagne under a sunshade on the terrace. We were shown Gérard’s two ateliers, where he worked hard both after and before his swimming and sailing – my idea of the perfect life!  Later in the month, I bought an oil painting and a large charcol drawing by our host which still today hold pride of place in my study, and which can be seen above.

Whenever the children were happily occupied and supervised and Maurice was reading Paris Match or Le Sud, to which he became addicted, I just wandered and watched. There was an element of eternity about the old men in straw hats playing Boules in open squares under the trees, or in the shade of Les Arceaux, which date from Roman times.

In smaller towns, and even in the old parts of Montpellier, women sat in groups on the pavement outside old houses and sewed while watching the world go by. Like old Youghal women in The Mall. Like many of the Vermeer women.

During our stay introductions through the Calvets’ extraordinary network of friends opened the doors of chateaux and castles which had survived the Revolution in dilapidated splendour. We walked the baking streets of towns whose names were so familiar from paintings and novels, and danced, of course, on the Pont d’Avignon. 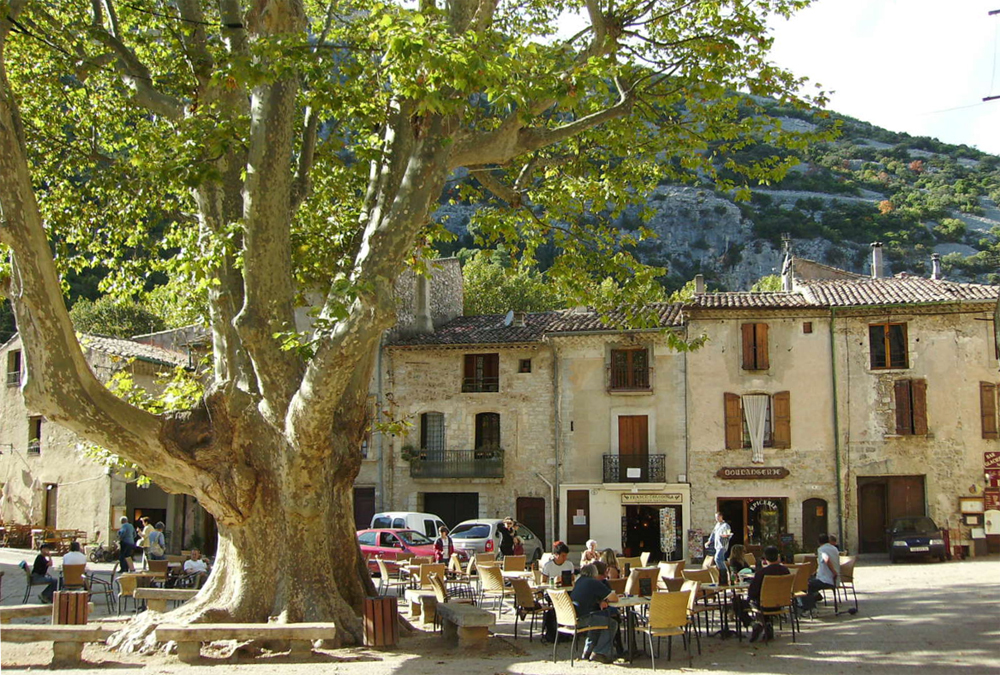 St Guilhem-Le-Désert, courtesy of the Montpellier Tourist Board

We visited the extraordinary medieval village of St Guilhem le Désert, which seemed to me without equal anywhere I’d seen. There was no trace of this past or the previous century anywhere. Only steep narrow streets no wider than an arms-length and ancient stone steps leading to bronze tongued fountains. Inside a church by the square, it was as cool as a tomb under the stone arches, and nearby women had left wine for the evening meal to cool in gushing waters, on stone the colour of old honey. A few spoiled cats stalked around.

We visited Arles, with its pavement cafés, like Van Gogh’s night café and from a balcony looked out over the red rooftops beloved of Vincent. Beyond, the broad blue Rhône shimmered in the heat.  It was a holiday of white hot days, with very little wind, rambles in the country, irresistible rural inns with tables set out under trees, and mile after mile of burning landscapes, including the Chateauneuf-du-Pape vineyards without a single inn or restaurant in sight.

July moved along and it was too short a time before the days of wine and ice-cold pastis would draw to a close for us, and one morning neither Maev nor I went swimming. Instead, we did everybody’s washing – the last task of all holidays, all love affairs with idle summer days, when routines are not even remembered, much less followed. 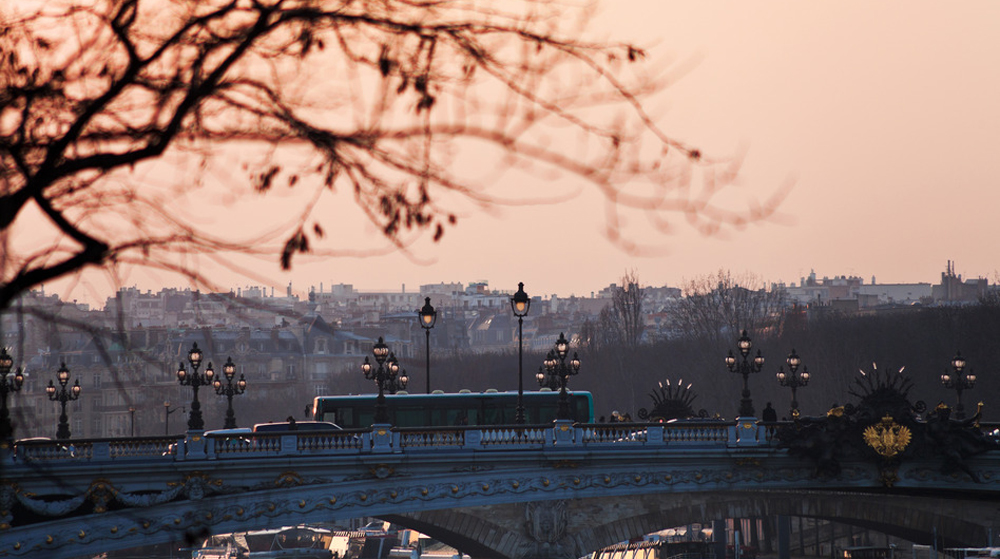 view of pont alexandre iii in Paris on sunset

After a farewell dinner with the Calvet family, we set off early drove up through France on a punishing drive via Paris just in time to catch the ferry at La Havre.  The following morning the sky above deck of our ship bound for home was grey and cool, with some hazy sun trying to break through.  Home? Even our own house would seem strange to us when we saw it again. Not to speak of our dark and rainy town.

Yet as I poured fresh breakfast coffee for Maurice, I watched his grin slowly appearing with the new plate of croissants, which the waiter placed at his elbow. We’d had the holiday of a lifetime.Courage, mon ami, le diable est mort!

From Friends With The Enemy – A Memoir by Val Mulkerns, available now.