In Flanders Fields – By Val Mulkerns 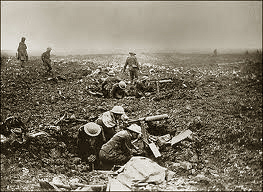 When I was in Belgium recently I remembered something I thought I’d forgotten.  It happened on a dark November evening when my brother Jim and I were taken to Dorset Street for the first fitting of new winter coats.  My mother always preferred to walk, if there was time, instead of taking a bus or a tram, so when we emerged from the tailor’s into some sort of confusion on the street, we were surprised when she told us to be quick and we might catch the approaching tram.  She could run faster than either of us, and so we were dragged on board and in a position to look down from a safe height at the angry crowds who were jostling and shouting at two or three women shaking collection boxes.

‘Stupid, stupid people,’ my mother muttered.  ‘They can’t see that other people have a perfect right to buy and wear poppies in memory of those poor slaughtered young men – many of them Irish anyway.’

It was grown-up talk, and it didn’t particularly interest me then, but the words came back vividly as we stood on that bleak cold day in Flanders Fields.  In the grey gloom, the thousands of small white crosses seemed to stretch for miles in every direction.  On the horizon, just beyond the cemetery, a tall trio of soldiers stood among the trees as though on guard.  They turned out not to be real, but a very fine and moving piece of sculpture.

When we drove on to Ypres we found under the Menin Gate, and covering every inch of the town walls beyond it, many thousands of names similar to those under the entrance to St Stephen’s Green at home, names like Murphy and Fitzgerald and Kelly and Mangan and English and French and Belgian names of men who had fought and fallen too and it was extraordinary to learn, by looking at the archive photographs in the Cloth Hall, Market Square, that this small town which we were exploring had been completely gutted by shells and canon fire, and meticulously rebuilt exactly as it had been before the First World War.   Nobody looking at the tall fourteenth-century cathedral could believe that it too had been gutted.  But the people of Ypres have done more than just rebuild.  Every morning and every evening to this day the sound the “Reveille”, in memory of those innocent dead, and townspeople gather in the square to stand in silence for the duration of the ceremony in winter and summer alike.

It seemed fitting, somehow, to be exploring, in sleety cold, places like the awful Death Trenches, and the grave of Francis Ledwidge who was blown away by a shell not far from there.  That grave, unlike those of Wilfred Owen and Siegfried Sassoon, was not actually part of our itinerary, but when we mentioned Ledwidge to the knowledgeable gentleman from Bruges who was our guide, he at once decided to include it.  And so we discovered, eighty years after his death, that somebody had left fresh spring flowers on the grave of the young Irishman, and nearby was his memorial sculpture.  When he died, he was only twenty-nine years old, so maybe Seamus Heaney is right in the closing paragraph of his introduction to Ledwidge’s Collected Poems:

Ledwidge solved nothing.  As a poet his sense of purpose and his own gifts were only beginning to come into mature focus.  As a political phenomenon he represents conflicting elements in the Irish inheritance which continue to be repressed or unresolved.

Indeed, since that disgraceful scene on Drumcondra Road, all those years ago, not much has changed.  One sees a tiny minority of people in Ireland wearing a poppy on Remembrance Day, as I do myself, despite an acknowledged republican background.  But it takes a long search to find a poppy seller.

For all that, the First World War and its Irish connections have continued to provide inspiration for writers as far apart as Neil Jordan and Sebastian Barry, or Frank McGuinness and James Plunkett.  It’s there still as a tantalising contradiction, and it seems it won’t go away.

In you, our dead enigma, all the strains
Crisscross in useless equilibrium
And as the wind turns through this vigilant bronze
I hear again the sure confusing drum

You followed from Boyne water to the Balkans
But miss the twilit note your flute should sound.
You were not keyed or pitched like these true blue ones
Through all of you consort now underground.

From ‘In Memoriam Francis Ledwidge’, by Seamus Heaney