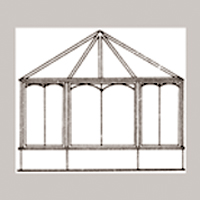 I thought of Miss Havisham when we walked into the old kitchen in Ferrycarrig the day Hanny died in Cork. She had only been five weeks away, having been found unconscious with a broken hip one April morning up in the garden. A spell of unseasonably hot weather had followed and Hanny had not been reckoning on going anywhere. She had not gone anywhere for three or four years, and the last breakfast she’d prepared had a coating of mould all over it on the table. What had been a saucer of milk on the floor looked alive under its hairy growth, and some enterprising spider had spun a trap for flies over the decayed jam in a silver dish. Half a slice of bread was green on a blue plate and there seemed to be over all the other signs of breakfast – the silver teapot, the strange-looking half-melted butter, the solidified milk – an invisible skein of decay.

Dust covered the silent old cluttered flagged kitchen, of which all my memories were noisy ones – laughter, conversation, voices raised in argument. This was a house to which scattered members of a large family had come home most summers, bringing a new wife or child to be inspected, slipping for a couple of weeks or months even into a way of living that hadn’t changed much in fifty years. The summer I married Martin I realised exactly how dotty a handsome, perfectly normal-looking old lady could be, and I realised something stranger. That family did not spend months together every year because they liked one another.

One evening after supper I was introduced to Mama, so called by the grown men and women who were Martin’s uncles and aunts. Before this I had only heard Mama talked about. I was told she was not well enough to meet a new granddaughter-in-law but how glad she would be to meet me when at last they could wheel her down. She looked a little formidable, with a high-necked blouse, white hair arranged like a bird’s nest over some sort of frame, fine black and slightly hostile eyes under bushy eyebrows. She was not delighted to see me. She looked back annoyed at the daughter who was in charge of her wheelchair.

‘This is not Alex’s wife, Mama, how could she be? You know Alex’s wife died during the war. This is Ruth, Martin’s wife. Margaret’s son Martin’s wife– won’t you say hello to her?’

‘Margaret had no sons, only two crimped and spoiled lassies, that would annoy the life and soul out of you.’

‘They were Nora’s girls, Mama. Margaret had two sons.’

I excused myself suddenly at this point and rushed to find Martin. ‘Come up with me or I can’t face her. She keeps mixing me up with somebody else.’

‘That would be Alex’s wife, her King Charles’s head. The old girl is nutty as a fruit cake, but you have to meet her some time and it might as well be now before she takes to her bed for the last time. All right, I’ll go up with you. I was keeping out of the way because for some reason she’s not too keen on me either at present.’

This time the old lady in the bay window held out a claw hand. Evening light from the harbour was all around her, adding to her good looks.

‘How do you do, Ruth?’ The old voice was civil now but automatic, like a child’s repeating a lesson.

‘I’m very well thank you, Grandmother, and delighted to meet you. I’m so glad you’re better.’

‘Hello Gran.’ Martin bent casually and kissed the old face which recoiled as from a blow.

‘Come on, Mother,’ Eleanor behind the chair said briskly, ‘You know perfectly well that Martin had a patch worn up the centre of the stairs bringing you sprats he caught when he was little. Once he tripped with a two pound jam-jar full of seawater and it took us weeks to dry out the carpet.’ Martin laughed and we all followed.

‘I’ll catch you something better for your lunch tomorrow, Gran,’ he promised, ‘I’m taking Ruth out fishing in the morning. Jer Power is lending us the boat for the last day.’

‘Where are you going away to?’ rapped the old woman. ‘Why can’t you both stay here?’

‘Work, Gran. Ruth and I have to go back to work in Dublin. The holidays are over.’

‘The honeymoon,’ Eleanor reminded her mother again. ‘Ruth and Martin have just got married. We told you – you had a piece of the cake.’

‘I will not see Alex’s wife,’ the old woman said again and Martin cast up his eyes in defeat, ‘she’s beneath him in brains and breeding with an outlandish name I can never remember.’

‘She had’, said Hanny from the corner where she was playing patience as usual, ‘a perfectly ordinary name for an English girl, Mama. She was called Janet – in fact it’s a Scots name too.’

‘Moreover she’s been dead for donkeys’ years,’ Eleanor snapped. She was the best looking and shortest tempered of the aunts. ‘Won’t you say goodnight to Ruth now?’

The impassive old face turned away and the claw hand I had touched earlier waved to somebody taking an evening stroll below in the street. Martin motioned me away and Eleanor smiled a wordless goodbye to both of us over her mother’s head. She was the one of that family who interested me most, but it was several years before I got to know her well.

We had a couple of sons by then and Martin used to urge me down here with them as soon as the school where I taught broke up for the summer months. He got away from town himself whenever he could, but for quite a lot of the time I was thrown on Eleanor for company. Each July and August she got a locum tenens to take over her practice in Cork, and she came down here with her family. We went walking most warm evenings after supper, leaving Margaret, my mother-in-law, and Hanny to keep an eye on young and old. Eleanor’s husband was there too but seldom found favour with anybody in that house, including his wife. Meeting him on the stairs one hot evening when we were on our way out, I realised for the first time how people who had once cared for one another enough to marry could become strangers, and it made me a little frantic.

‘We’re off for a walk, Con – like to come with us?’ I invited without thinking, and I could feel Eleanor stiffen beside me. She need not have worried. Con knew the rules. He shook his neat grey head, smiled, stood ironically to attention to let us pass on the stairs, and said he would see us later. He had the remains of trim military good looks, and an air like Eleanor’s of belonging to a world outside that didn’t exist any more. Unlike Eleanor, he accepted his lowered status with humility; he still had a lot to learn about so many things, his humorous expression seemed to say. Learning might even be enjoyable. Eleanor, unteachable, linked her skinny arm through mine and forced the pace until we had left the old town behind in its cradle of reflected light. You could see the harbour at the end of two dozen or more laneways in that town, some arched from medieval times, some open, all smelling of seaweed and doubtful drains and (I fancied) brandy which sailors had been bartering these hundreds of years for homely items like eggs or cheese or new potatoes or cartwheels of new bread from the town’s ovens. When I said something of this to Eleanor she shrugged, never interested in anything that was available to be enjoyed, except my children, and King’s Amusements out at the end of the promenade. She was not, obviously, heading for King’s tonight to spend an hour trying to throw rubber rings over hideous ornaments which she liked to leave in gardens on the way home if by any chance she won any. Winning was important to Eleanor. Her long legs forced the pace now along a sandy track that led for a mile or so away from the coast and then back to a rocky headland where a couple of cottages had fallen into ruins among the tough sea grasses. From here you could see the town toylike with its sunset spires, its encircling black walls, its golden rooftops. It might even have seemed like a big important town to somebody growing up on this headland. I said this idly to Eleanor and she laughed so that I saw the only ugly thing about her, the jumbled dark teeth which might have been pretty and sharp like a cat’s when she was a girl.