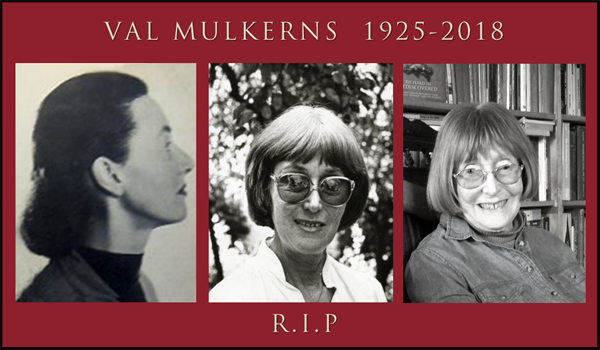 A long-standing figure of Irish letters and member of Aosdána, Val Mulkerns wrote her first acclaimed novel, A Time Outworn in 1951, and has since, in her long career, worked as an associate editor on The Bell, distinguished herself as a novelist, short story writer, journalist, radio essayist and more. See details on her website here.

Mulkerns has been described by Laureate for Irish fiction, Sebastian Barry as, “a masterly writer in the tradition of Seán Ó Faoláin” and in an Irish Times review of her collected short stories,  Memory and Desire last year, Anne Enright noted that in her work, “liberalising, Shavian voices form a neglected strand of the Irish tradition.”

Her first novel, A Time Outworn, received critical and popular acclaim in Ireland and Britain in 1952. She published four more novels, two children’s books and several collections of short stories, including the linked sequence Antiquities, which won the AIB prize for literature. She was married to the writer Maurice Kennedy and they have a daughter and two sons. She worked as a journalist and columnist and has been a much-loved voice on RTE’s Sunday Miscellany down the years. Having featured in many Irish literary anthologies down the years, she is the most senior Irish writer included in Reading the Future: New Writing from Ireland Celebrating 250 Years of Hodges Figgis, edited by Alan Hayes.

In 2014, a third edition of her novel The Summerhouse was published by Tara Press, followed in 2016 by a new book of her collected short stories, Memory and Desire (451 Editions).

Friends With The Enemy, is the author’s latest book, launched just before Christmas. It takes the form of an elegant memoir, which begins with tales of a Bohemian Dublin childhood and goes on to recount her life as a writer, covering almost seventy years of life and times in literary Ireland.  All three recent books are available in good book shops.

To contact the publisher, write to: books@451.ie and see more at:

For a high resolution file of the portrait photo above, click here.

For a web-sized version of the portrait photo above, click here