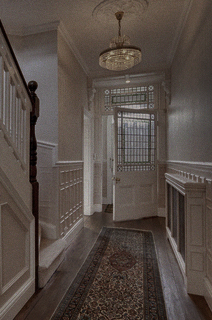 In the late 1950s my husband Maurice would be out Thursday nights presenting a programme called Plays of the Week from the old RTE studios in Henry Street.  I would hear him letting himself in upstairs through the main hall, and walking across the as yet uncarpeted floor to the bathroom.  This room, together with the kitchen beyond it, had been made from a tall-windowed back bedroom that used to be Mr Madden’s room before he sold us his house.  Little fragile plants were nurtured on the sunny granite window sills, and no doubt he had watched for signs of growth each morning before going out to work in the bank.

Horatio’s footsteps used to disappear into that room.  The fact that we had a ghost sharing this old house with us didn’t particularly bother us because obviously he meant us no harm, but I can’t pretend it wasn’t spooky occasionally to look up from a book on hearing footsteps in the upper hall and go to the living room door to call hello to Maurice.  No answering call from Maurice because it wasn’t Maurice.  Maurice would come in about fifteen minutes later after a drink, perhaps, with his producer in the Opal Bar, and he would run downstairs straight away to narrate the night’s events.

There were no recorded radio programmes then; everything was live, and if some reviewer around the table had a cough you heard it all through the programme, partly muffled by a handkerchief.

If Horatio had already come in from a late mountain walk and gone straight into his own room, I would tell Maurice that, after he’d finished his story.  A rationalist in every other way, he believed in ghosts.  He had once seen a ghost at Moll Goggin’s Corner near the lighthouse in Youghal.  He was a schoolboy then, down as usual with his grandparents on holiday, and with a few friends he had been on his way for a swim out near Clay Castle.  A woman in a straggling long skirt had approached them at the corner, and, polite young fellow that he was, he stepped onto the roadway to let her pass.

‘Why did you do that, Kennedy, with a car coming straight at you?’ One of the friends asked.

‘To let that old woman pass, of course,’ said Maurice.

They all looked back.  There was nobody there.  Maurice crossed over the road to look back beyond the bend, but there was nobody.  The friends were local fellows and quite blasé about the occurrence.  ‘It’s only Moll Goggins, so,’ said one of them. ‘Some people see her and some don’t.  The da knows all about her.  She used to wait for her man coming in on the boats just there below at the market dock.  One wild night he didn’t come in with the rest and she kept on waiting for his boat to appear around the headland ever after.  Everyone knew about her when the old fella was at school, but I haven’t heard tell of her in a long time.’

‘She’s no harm,’ another voice said.  ‘She does no banshee wailing and she never says a word.  She died astray in the head, they say.’

We never heard any hint of why our Horatio elected not to stay in the grave, and none of the children ever mentioned hearing anything.  And so we absorbed Horatio in the same way we came to terms with the normal night-time sounds of an old house:  the noisy lead pipes which dated from 1870; the creaking shutters which were always drawn on stormy nights; the three sighing steps in the middle of the stairs which led down to the lower hall; the actual settling of the old place into sleep, like the occupants. This is when you heard, also, the breathing of the beech tree like small breaking waves heard through open waves on summer nights.

There was this feeling which I remember well that we had, so to speak, bought them all with this house, that they absorbed us as benevolently as we did them. But once, when we were all away on holiday there was a strange story waiting our return.  Ronan Conroy was one of the school friends who loved cats, and he kindly volunteered to come in every day and feed ours.  He had fallen asleep with the cat curled up beside him on a warm evening.  He woke up later, feeling cold and scared and no cat beside him and footsteps coming across the hall, which was four steps above.  He jumped up onto the landing, which was colder still; no sign of the cat, no sign of any intruder.  No sound now of any footsteps.  Just this illogical cold as though he were inside a cloud on top of a mountain.  He quickly checked the bathroom into which the footsteps had faded.  Nobody.  He checked the spare room.  Nobody.

We didn’t know what to make of this story, and at this stage I don’t know whether or not Ronan knew of Horatio and embroidered this bad dream around him.  I do know that the house was absolutely as we left it when we came home.

We decided that Ronan’s highly original and sceptical personality must have disturbed Horatio.  He never bothered us anymore than he ever had, and eventually, he seemed to melt into eternity on one of his own mountain walks, or is it just that he didn’t like a house with no children in it anymore?